and Professor of Law and Philosophy in
The University of Oxford

John Gardner died on 11 July 2019, aged 54. He died peacefully, surrounded by love and in his wife Jenny's arms. John was told that his cancer was terminal in the first week of Trinity Term 2019. In the same week, he received his book contract from OUP for Torts and other Wrongs. He resolved to complete the book and teach his graduate seminar on Discrimination as he had planned. He did both, in the face of all of his appointments, treatments and side effects. Days after his last seminar, John became gravely ill. His last three weeks were spent on the oncology ward at the Churchill Hospital in Oxford where he regularly welcomed deliveries of decent coffee and ham and cheese toasties from his devoted friends who accompanied him to sit out in the peaceful sunshine of the hospital's roof garden. His adored Jenny was by his side the entire time, looking after him with all her might. In the 11 week period between terminal diagnosis and death, John and Jenny lived the next 30+ years of their marriage. His last full day was spent in the sunshine and in style--in the company of his whole family, including his beloved children Henrik, Annika and Audra. He listened to music, sang songs, and talked philosophy. John died a very happy man, satisfied with the life he had led and the people he had led it with. 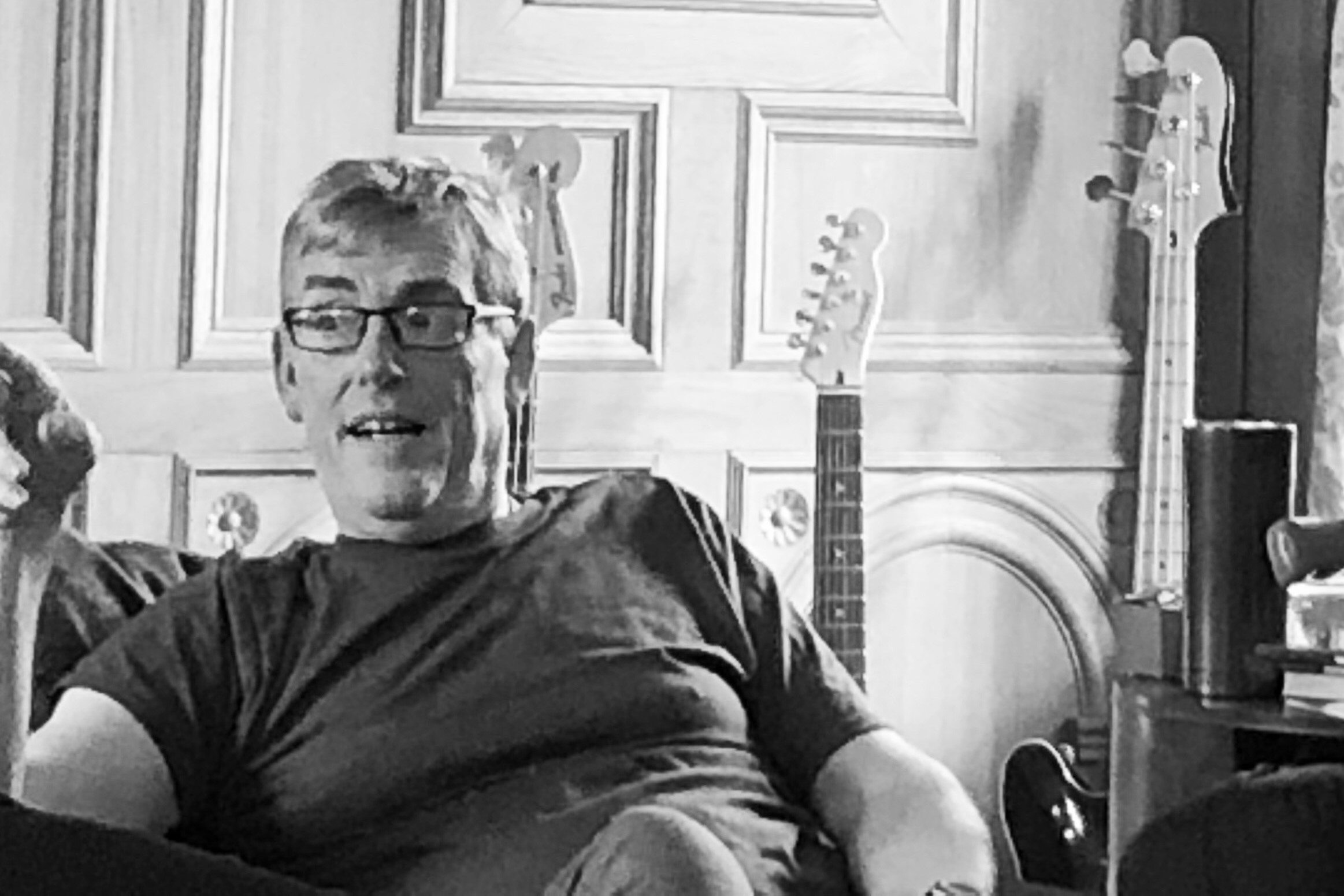 While he was ill, and at Jenny's request, John's friends and colleagues began sending him their memories of happier times. John was amazed by all the many stories and tributes he received. Before his death he asked for these to be made available on his website. They will shortly appear here. In the meantime, obituaries for John have so far appeared in The Guardian, The Glasgow Herald, The Oxford Times, The Times (Scotland). Obituaries can also be found on the websites of the Oxford Law Faculty (here, and here), University College, and Brasenose College. (07.08.2019)

Update: The stories and tributes are now available in the Memories and Tributes section of this site. A further obituary by Stephen Shute and Annalise Acorn has now published in The Independent and is available here. On John's work in progress page you'll find a new article, 'Why Blame?', written by John for a volume in honour of Nicola Lacey. On the video and audio page you'll find a link to a conversation between John and Tony Honoré to mark the end of their thirty years of teaching at Oxford, and an extended interview, alongside Timothy Macklem, discussing the influence and work of Joseph Raz. (23.09.2019)

Further update: Additional tributes have been included in the Memories and Tributes section of this site, including the remarks from Eric Miller on the award to John Gardner of the 2020 Hart-Dworkin prize from the AALS. Another new article has been posted to the work in progress page. 'Damages Without Duty' is forthcoming in the University of Toronto Law Journal and is reproduced here by kind permission of the University of Toronto Press.

Two recent events have honoured John and his contribution to legal philosophy. A workshop in December at All Souls College gathered colleagues, friends, and former students in wide-ranging discussions of John's work. Papers from the workshop will be published in a collection by Oxford University Press. Last week, the Oxford Jurisprudence Discussion Group hosted a book launch for John's Torts and Other Wrongs. Photos of the December workshop and a video of the book launch will be available on this site shortly. (30.01.2020)

I'm very sad to report that Tony Honoré died this morning at home, peacefully and surrounded by his family. Annalise Acorn and I had a long chat with him just 10 days ago, and in spite of his tiredness he was engaged and gregarious. But he knew and intended that these would be his last days. I was able to sit with him again on Sunday. He was by then mainly sleeping. Although today's news was expected it is still a great shock to be without this titanic man who survived grievous injuries at El Alamein, joined H.L.A. Hart in transforming the intellectual climate of Oxford law, and taught in Oxford for 70 years - 30 of them with me. Here is my memoir of our collaboration and friendship , written in 2008. And here is a short video of the two of us being nostalgic at a party to mark the end of his teaching career, just 5 months ago. (26.02.2019) 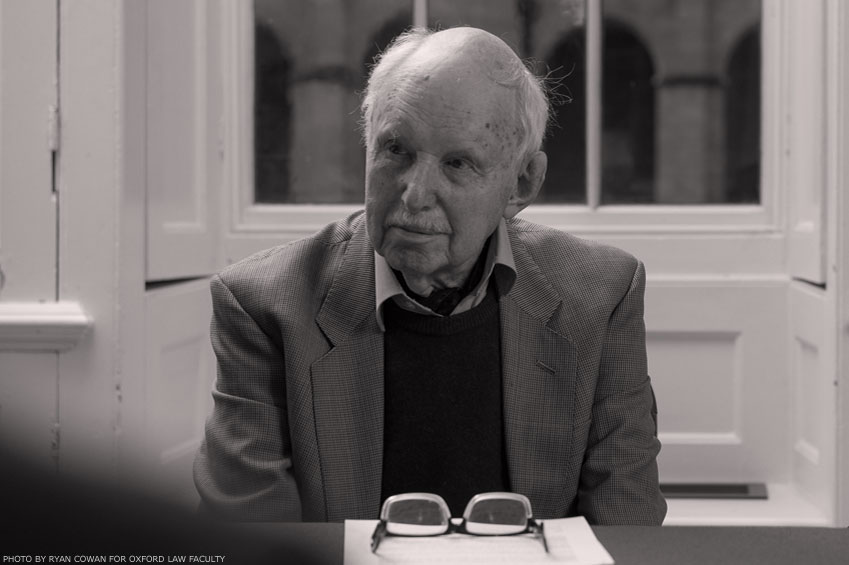 Update: My slightly longer obituary for Tony is now on the Oxford Law Faculty website. There is alsothis tribute from the alumni association of his boarding school in Cape Town (Bishops/Old Diocesan) which includes a wonderful photo of Tony as an athletic teenager. A full obituary is expected to appear in The Times due course. (05.03.2019)

Further update: new obituaries in The Telegraph (registration required) and the Oxford Times . (20.03.2019)

On my work in progress page you’ll find links to various recent works in draft form, including (following a number of email requests) the raw text of my 2017 talk about Eric Heinze’s book Hate Speech and Democratic Citizenship. Also a new version of the entry ‘Causation in the Law’ written for the Stanford Encyclopedia of Philosophy. The latter is jointly written with the great Tony Honoré – our first ever joint writing. (19.01.2018)

The zeal of our age revisited

At Jotwell , I’ve been responding to Bill Edmundson, who was kind enough to spotlight my 2014 talk on privatization. He’s given me a chance to expand on my original gnomic concluding paragraph in the light of 2016’s events. I guess on the principle that your enemies’ enemies must be your friends, I ought to be more pro-privatization by now. But that’s not actually how it works. A liberal internationalist isn’t doomed to fall in with profiteering global vampires. The freedom of corporations isn’t the freedom that counts. (05.01.2017)

I’m in São Paulo this week to deliver the inaugural Diversa Lectures at the University of SP under the auspices of the Instituto Rodrigo Mendes . My topic is ‘Discrimination, Disadvantage, and Diversity’ and you can apparently watch me lecture live here . Today is lecture 2 (‘What makes discrimination bad? What makes it wrong?’) beginning at 22:00 GMT (19:00 local time). (25.10.2016)

I’m regularly surprised to find my book reviews, or some of them, among my most requested, noticed, and cited publications. What does that say about the quality of my other work? Not good news, I fear. Anyway, multiple email requests in the last few weeks for copies of certain hard-to-find or paywalled items have led me to post preprints of all my reviews stretching back to 2000, including those of Lacey’s life of Hart, Bingham on the rule of law, Sen on justice, and – strangely, most sought-after of all! – two recent books on, respectively, the law and philosophy of food. (11.08.2016)

The Twilight of Legality

was the title of my Irvine Lecture at Cornell Law School , delivered on 6 October 2015, towards the end of my wonderful spell as a Visiting Professor there. I haven’t done anything with it in the meantime, but a few people have asked for the text so now it is posted on my work in progress page. (16.05.2016)

My friend Tony Honoré has just turned 95 and many friends and colleagues around the world will be pleased to hear that, in spite of some mobility problems, he’s still going strong. Some people have asked me whether our classes together will continue next year, when I move to my new job at All Souls. The answer is yes. As last year, we may need to find a location closer to Tony’s home and more accessible than All Souls. We have taught together since 1988, when he ‘retired’, and we have taught in the present format since around 1990, missing only one year. Since the mid-1990s our topic has been ‘Law and the State’ (which in practice means: political philosophy from 1945 onwards). The format is that we study just one chapter or article per week. Tony and I choose the first two. The rest are nominated by individual graduate students who also introduce them to the class. Every year, something new. Thanks to all the fantastic students who have contributed over the years! (08.04.2016)

I have been elected to a Senior Research Fellowship at All Souls College in Oxford, starting 1 October 2016. That means resigning my post as Professor of Jurisprudence in the University of Oxford, which I have held since 2000. I will still be teaching and supervising research in the University, but less than now. And with a bit of luck, I’ll be writing correspondingly more. My academic career began when I was elected to an Examination (then called  'Prize') Fellowship at All Souls starting in November 1986 – yes, that’s almost thirty years ago. (28.02.2016)